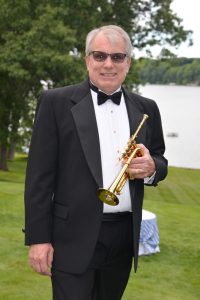 Gary has been performing for audiences for as long as he can remember, performing with many groups throughout his career. In 1991, Gary became involved with a big band and not long after became its leader. Gary now leads three of his own groups.

Gary has studied with many great trumpet teachers and performers, including Bobby Shew, Adam Rapa, Howie Shear, Claude Gordan and James Stamp to name a few.

Gary’s passion has always been music and especially the trumpet. He spent a few years on the road with a show band and four years in Los Angeles pursuing his musical career. Today, he focuses all his time playing trumpet and promoting his groups for many venues throughout Michigan, while also finding time to play with other groups as well.

Trumpet is still Gary’s passion! His motto is simply: “WE STRIVE TO KEEP MUSIC LIVE!”

Gary Greenfelder Orchestra performs throughout the Greater Detroit Area & beyond. Big Band Swing and more, with over 1,500 charts, we play what you want!